I’ve decided that meetings are unproductive because people don’t pay attention.  Here is what I’ve seen in the last few weeks during meetings:

Remember back in the day when there was a cure for things like this?  It would be nice not to treat adults like children but it’s inevitable.  Here are my solutions:

For cell phones, I think you should get it slapped out of your hand with a ruler.  In the seventh grade my Algebra teacher smacked a ruler on my fingers because he had taught my brothers…apparently it was guilt by association and he needed to make a statement.  We didn’t turn teachers in back then for being physical, in fact, our parents probably encouraged it and signed waivers.

For the talkers, duct tape their mouth shut.  In the fifth grade I watched a classmate get his mouth duct taped shut for continually talking during class.  Not just a piece of tape, he wrapped it around his whole head, more than once.  Good thing the kid didn’t have a cold.

Now, I don’t need a whole bunch of comments that I encourage abuse and violence because I don’t; however, I do think those of us who were punished back in the day in similar ways turned out pretty good.  It would be good to bring that back to the present day.

I do fantasize about hitting someone with an oversized frying pan, kind of like a cartoon.  You know what I mean, you smack them, their tongue darts out and their eyes bulge.  Then they go away rubbing the back of their head.  Such a great mental picture for me and a great therapy tool, try it sometime.  You can use your weapon of choice, it doesn’t have to be an oversized cast iron frying pan.

As I write blogs, check comments, look at my stats and check my followers I often wonder if I’m really making people laugh? How many people read a story and never come back because they don’t find me funny?  Perhaps a lot.  Perhaps very few.  Obviously not the same thing makes everyone laugh, let’s face it, what fun would that be?

I started thinking about what really makes me laugh (yes, I know it’s almost everything) and had to go back into my memory banks and archives to find a few things that make me laugh, sometimes uncontrollably.  Let’s see if the same things make us laugh.

This cartoon has been my favorite for as long as I can remember. In fact, when I was married we bought the VHS tape that had this on it.  I lost the tape in the divorce, I’m still upset about that.  I actually was never a huge Bugs Bunny fan either, go figure. 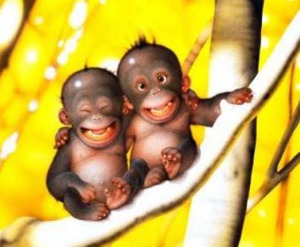 I’m also not a huge monkey fan but this picture makes me smile.  I’m not positive where I got it but I think it showed up in a card I received from a roommate once which means I’ve been dragging it around for years, I bet I still have the card from her somewhere too. 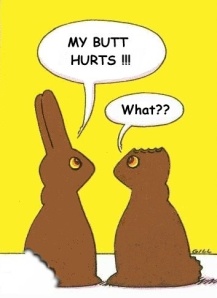 This cartoon came to me in 2003 and it’s still getting mileage today.  There has never been a time I’ve looked at this and haven’t laughed.  Such a classic.

Favorite cartoon movie scene.  I actually use the line “what do you want me to do, dress and drag and do the hula” quite often.

I also enjoy Ren and Stimpy; however, could not find a clip of Ren being allergic to Stimpy which is my favorite.

Hopefully these remind you of some of your go-tos for laughter.  If not, you can borrow some of mine if you want.

College football is sometimes said to be a religion…..well, I think I now have proof that it is.

My Idaho guy is an Oklahoma Sooners fan.  The day I met him on the plane, he was dressed in a Sooners jersey, a Sooners long-sleeved shirt and a Sooners hat.  If Wranglers made a pair of Sooners jeans he would have been wearing those I’m sure.  I didn’t get a chance to check out the belt buckle, it could have been Sooners for all I know.

On a recent phone call, I told him that I was following the Sooners on Twitter so perhaps I could have an intelligent conversation with him in the coming weeks.  Well, that’s all it took for him to get on a soap box and talk and talk and talk.  I started to wonder if I needed Twitter to keep up on anything, all I needed to do was ask him.

As I got the giggles while he was talking he stopped and said, “you know, today I ran into a guy who said, “man, those Sooners should have a great season” and that’s all it took for me to unleash about college football.  Well, 30 minutes later, I knew I should stop talking but just couldn’t get myself to do it.  I finally said to the guy, I feel like one of those preachers in the south who just can’t shut up, I’m sorry.”  He said the guy was already in some sort of a trance and just stared at him.

Then he said to me “I think I have a problem honey.  Why do I do that?”  The fact that I was already laughing hysterically did not help the situation at all.  I was picturing him on a stage preaching to a sea of crimson and white about college football and I had to tell him that.  I couldn’t give him any sound advice and honestly could barely speak at all.  Needless to say the conversation took quite the turn and both of us laughed and made up stories for the next hour.

It’s surprising how quick the mind works and usually goes off on a tangent you don’t want it to.  The scenario of him acting like a southern preacher played out very vividly in my mind and completely overtook my thoughts.  I do believe college football is a religion to some.  As a side note:  I DO NOT call him on Saturdays.

What do you think it means when you get a fortune that has a typo in it or something was lost in translation?  Does that mean you will have really bad luck for life or something?  I’m a little worried about that because my last fortune said:

“May the warm winds of heaven blow softly upon your sprint.”

Now, we are all very aware that I do not sprint, even if the warm winds of heaven are pushing me at hurricane speeds.   Pretty sure God can’t even get this rear end to sprint.  I also haven’t dared throw it away yet for fear that’s more bad luck.  I can only hope that sprint was supposed to say spirit.

My quest now is to find a Chinese philosopher who could help me out with this.  If I find one I will share the news of what a fortune like this means.  Until then, here’s hoping the winds are strong if I need to sprint somewhere.

Apparently someone nominated me for the Versatile Blogger Award.  I appreciate it from a fellow blogger.  Broke Wife, Big City was kind enough to pass the nomination on to me.  From what I can tell, there are rules to this award, one of which is I have to list 7 random things about me.  Here goes the 7 things…..

Another rule is to nominate 15 other bloggers for this award.  Thank goodness I’ve been reading Freshly Pressed and doing some searching to see what others are up to.  Here’s my best shot:

Not Quite Old – A great perspective

The Reviews Are In – Love the football and food segments

Chuck Cotton – The bacon scenes blog is the best

An Attempt at Humor – Funny

What I Meant 2 Say – Honest

Winnemucca Move – My friend Jena who has moved to Nevada and has a great outlook on the situation.

Whew, that’s a lot of information for an award that doesn’t allow me to do an acceptance speech on stage and have the teleprompter tell me to wrap up for 6 minutes until they finally go to commercial.  This post will have to do.

Thank you, I am truly honored.

This blogging thing is interesting.  There’s so much I have yet to learn not only about writing but about blogging itself.

I was looking at my site stats today and noticed there is an area called Search Terms.  Obviously this is what someone searched for when they found my page.  I read through that list tonight and pretty much wet my pants.  Giggled for a good 20 minutes before I could even share the one that REALLY caught my eye.

Now, I’m no prude but I have no idea what the hell that is.  I know what mud wrestling is but the word riding brings a whole new element.  Do you bring your own saddle?  Enough of that, I better not speculate on what it might be or why someone was searching for it, I’ve also resisted any temptation to search for that myself because I really don’t want to know, not tonight anyway.  It might be disturbing and I’m here by myself.

I wonder how disappointed that person was when they clicked on my blog?  Is that one of those “damn search engines never give me what I want moments”?  Perhaps my blog ruined a ‘special moment’ they were trying to have, sorry buddy.

I’m certainly going to watch the search terms closer now, maybe there’s an untapped market of readership out there I have no idea about!!

Now, I refuse to post the people of Wal-Mart photos here as there is a website dedicated to them (click here).  However, I received an email today with some new photos and I haven’t had one for a few months.  I’m not going to lie, to see these boosts my ego.  I sometimes wonder if these people are planted and they pose for these photos, today I realize a majority of them are probably true though.  Here’s why:

I believe these pictures could be labeled, People of the State Fair, People of the County Fair, People of My Hometown or People at the Flea Market.  They are everywhere, some of us may even be these people from time to time, I have some items I wear walking that should not be for public consumption.

My advice to you:  cover it up, buy it big enough, wear underwear smaller than your shorts, check out the damage after some bad gas and for the love of God read very carefully what your shirt says before you wear it in public.

One of my coworkers said something to me the other day that kind of hit home.  He said “something funny always happens to you, nothing funny ever happens to me”.  My answer was “nothing funny happens to you because you don’t look for it”.  And that got me thinking…..what is really funny? How do we notice funny?  Am I the only one that sees funny things?

I do know that I am not the only one that sees funny things.

I also know that funny is everywhere, you just have to notice it.  Hopefully you will follow funny and funny will start following you.