When I wrote Winter is Here I had no idea how true those words were.  Old Man Winter and Mother Nature are still shacking up in the empty lot down the street and they have now added a foundation under their RV.  We may never see the other three seasons again.  All I can say is they best not be reproducing, I can only imagine how tragic that would be.  I’ve been dropping off birth control outside their door so hopefully they get the hint.

There was no easing into winter this year.  Winter hit us like the fat kid hits the buffet, hard and fast.  There was a storm, then another storm, then a thaw and then another storm and now the cold.  The roads are bad, the alleys are worse and my parking spots are the worst.  Putting the trash or recycling out to be picked up is like working your way through a corn maze in a blizzard.  You need climbing ropes, an ice pick and some oxygen.  Then you have to go through it again to put them back.  I’m thankful my neighbor does the garbage so I only have to do the recycling.

Each time I go outside I feel like I’m taking my life in my hands.  The odds of falling are at about 90%, the odds of getting stuck somewhere is about 60% and because I haven’t had one in this vehicle the odds of a flat tire are increasing every day.   Then I take into consideration the other drivers on the road and I completely panic.  The drivers that are out on the bad roads are the crappy drivers that were on the good roads during the good weather!!!  Not a pleasant thought.

School has been canceled around here so often the kids are all going to flunk this grade, they’re just going to have to do the whole year over again.  They may as well call off the rest of the year and get the little buggers a job.  Preferably clearing snow and shoveling for those of us who aren’t supposed to.  I’m not sure I remember a time when school was canceled due to it being too cold when I was a kid.  However, I actually wore boots, a coat and mittens to school and the bus picked us up.  I live near a middle school and those kids who have to walk to school should dress better.  I say my prayers for them every day.

I have to remote start my car twice before I can even get in it.  Then I have to go out and start it and let it run for 20 more minutes.  I’m averaging about 12 miles to the gallon right now because I let it warm up so much.  I also received a lesson in changing my car battery.  Wasn’t really a lesson I asked for but I was bound and determined to not be such a girl and do it myself.  That probably won’t happen again, nothing wrong with being a girl who needs to be rescued sometimes.

Here are my Facebook posts from the battery changing incident:

“Battery dead and won’t jump.  Determined to take it out myself so I text knowledgeable man for instructions. Instructions good, toolbox bad, smarty comments from knowledgeable man.   (Below is the picture of my pathetic excuse of a toolbox I sent him). 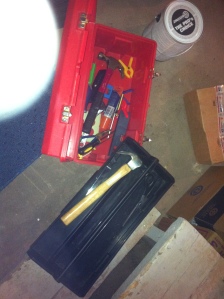 Find wrench that might work hidden under hammer.  Get one cable loose. Open roomies truck to take off gloves to check phone.  Coffee container escapes and rolls under truck.  Lay on ground to try to reach it, need wrench to help retrieve it. Now wet from head to toe with one battery cable sort of off. If the battery weren’t already dead it would have been after my tantrum with the wrench. On a mission to find socket set and maybe a Valium. This is going to happen!!

“Thought I posted earlier but apparently in my celebration of still having all my fingers and toes I did not.
Borrowed a socket set.  Took out battery according to texted instructions, 10 minutes to get nuts and bolts off and another 30 minutes to figure out how to get it out around a plastic filter cover and a boatload of hoses.  Had battery tested.  Dead (obviously).  Bought battery.  One last text question to make sure I didn’t electrocute myself during install. Put it in and used all the parts to get it secure!  It only took 4 hours, a little frost bite, no tears, no booze and no drugs.  I did think I gave myself a black eye at one point but it hasn’t bruised yet so I think I’m good.  It’s been quite the day.”

Next time I think I can get the battery changed in under 2 hours!!

I procrastinated putting up plastic on my living room window this year.  That was a really dumb thing to do.  I now have folded laundry stacked on the back of a chair in the living room and I leave it there because it blocks some of the cold air.  A very redneck way to take care of the issue but who’s to say I’m not a redneck deep down.  Okay, okay, I’m a redneck on the surface too.

I have discovered that I do the ‘sneak and floor it’ move several times a day.  You know the one I’m talking about.  You’re at an intersection you sneak, sneak, sneak out to attempt to see beyond the giant snow banks to see if anyone is coming.  When there comes a time you believe you can make it you put the pedal to the metal and say a quick prayer.  You certainly don’t go very fast because it’s slippery but your wheels are turning like you’re in the Daytona 500 until of course you hit a small patch of dry pavement, then you get a mild case of whiplash.  It’s a tricky move but I think I have it mastered.

It was 20 degrees here in the Northland today and someone posted on FB they spotted a man on a motorcycle.  We sure are a desperate bunch around here!  Sounds like it’s going to be in the high teens and twenties over the next few days so I think I’m going to sneak over and pack up Old Man Winter and Mother Nature myself and run them out of town.  This is Wisconsin and I’m pretty sure I can find a mob of people to help me.

View all posts by followingfunny